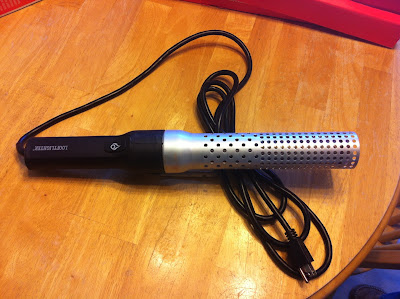 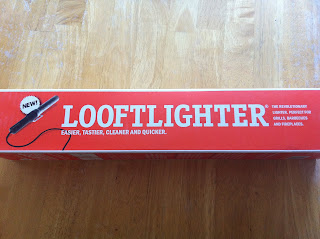 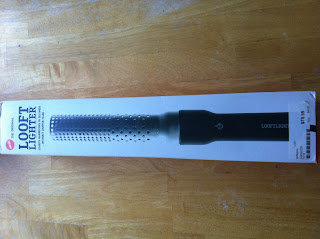 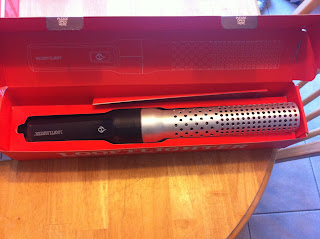 Well if you guys never heard of them or wonder what is a Looftlighter. The Looftlighter is basically a electric charcoal lighter that uses technology that supper heats the airstream to  600 °C / 1112 °F on the desired spot on the charcoals and lights it within 60 seconds. The Looftlighter is a Swedish invention and patented there. 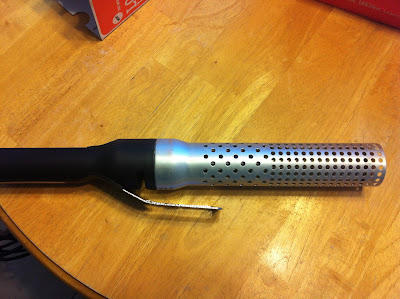 The beauty of the Looftlighter is that it can ignite anything from charcoal to wood with the touch of a button. It also eliminating the use of lighter fluid which gives you the added bonus of not worrying about toxic fumes and you don't aft to worry about your food tasting like lighter fluid or chemical taste. It's also a lot safer to use then Lighting chimney and lighter fluid. Using the Looftlighter is also more environmentally friendly.
Specifications from their website:
Size and Weight
§  Lenght: 452 mm (17,8 inches)
§  Width: 65 mm (2,6 inches) (at the most)
§  Depth: 65 mm (2,6 inches) (at the most)
§  Weight: 880 g
Power
§  1800 Watt
§  120V
§  50 Hz
§  600°C
Usage
3 meter power cord (9,8 feet)
Warranty
The warranty is valid 12 months from the day of the purchase. The warranty covers defects in materials and workmanship. We are not responsible for personal injuries and material damage inflicted by improper or careless use.
When I recieved the Looftlighter I was kind of effy on how it would performe. Well let me tell you I was beyond impress on how fast the Looftlighter actually lit my lump charcoal as you will see in my video. I had a pretty good flame going in  one spot within 45-60 seconds which is totally impressive. I found its best to light a spot at 12 O'clock, 3 O'clock, 6 O'clock and 9 O'clock to get a nice even heat in my Kamado Joe and Big Green Egg BBQ. It took me aproximately 3 minutes to have flames in all four spots in my BBQ and a nother 2 minute to have my BBQ ready to go at 500°F. which is pretty fast and impressive. I also loved the fact that the perfurated shroud/casing arround the unit was quick in cooling down. I have noticed it takes aproximately 5-10 seconds for the casing to be cooldown enough for the touch which is quite a good safety feature. It also has a metal foot with a built in bottle opener that is used to lay down the too after each use to let it cool down so you don't burn down your deck or table. 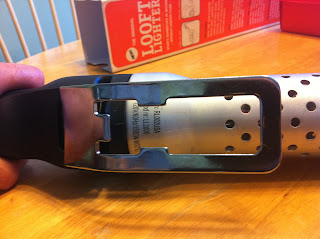 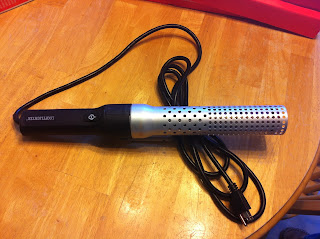 As you can see it has a protective metal casing
I have used the lighting stick/cube, lighting chimney, 99% Isopropil/rubbing alcohol and torch to light my Kamado Joe and Big Green Eggs with. From my experience so far I find using the Looftlighter more cost effective on the long run then the other methods. The loofthligher is also a lot easier to use and a lot faster in lighting the lump or briquette charcoal.
Here's how easy it is to use the Looftlighter:
1. Touch the desired spot on your charcoal with the Looftlighter;
2. Press and hold the button on the Looftlighter;
3. Ounce sparks appears draw back the Looftlighter a little bit (approximately after 10-20 sec);
4. Continue to point the Looftlighter in the same direction till you have a nice flame (approximatelly 45-60 from the start of the entire process).

Source: Looftlighter.com
Note: The first time using the Looftlighter the unit will smoke. Its the oil burning off the element nothing to worry about.
Why use the Looftlighter?
"With the Looftlighter you will never again need lighter fluid, lighting cubes or other chemicals. The lighter fluid is forbidden in California since 4 years back and the EU want to forbid it year 2014.
Lighter fluid and other chemicals using for light a barbecue is dangerous for the environment but also for the people using it.
With the Looftlighter you light your grill or fireplace in a way friendly for the environment and also safe for you." Source: looftligher.com
Here's a little bit of history of the Looftlighter company from there website:
Looft Industries AB is an innovative Swedish company specialized in developing, designing and marketing new products in the grill segment.
We have developed our own trademarks such as the Looftlighter and the Looftaccessories.
We have our own very prominent design team and also a big interest in environment friendly products; for instance the Looftlighter eliminates all use of lighter fluid, which only in Sweden is more than 10 million bottles/year.
We started marketing the Looftlighter in Stockholm Sweden 2006 and it has now sold over 100.000 pieces in 22 countries world wide.
We continue our aim to develop better, more innovative and more environmentally friendly products to help getting that food as perfect as possible!
The Looftlighter story
It all began 1997 when theatre director Richard Looft got angry. The chicken he barbecued tasted lighter fluid! Richard started thinking of a better and more environment friendly way to light the grill. He poured coal into a toaster, turned the flow around in a vacuum cleaner and discovered that the coal got ready to use in just a few minutes! In 2003 a prototype was presented to the Swedish Inventors Association. In 2005 Looft Industries Ltd was established. In 2006 the first 5000 Looftlighters arrived in Stockholm and Richard then called the most exclusive department stores. Nobody wanted even to see him… So he took his grill, placed himself outside the shops, called again to the purchasers and asked for 60 seconds of their time. They came out, Richard made his demonstration and all ordered the Looftlighter right in the street. Today the Looftlighter is being sold as a BBQ- and fire place lighter in all of Scandinavia, more than ten countries in Europe and has also been introduced in the USA. Source: looftligher.com
Rating:
Well after using the Looftlighter for a little while now I am tottaly impress on how fast it can actually light your charcoal. The unit is also built to last and is actually pretty easy to use. I also loved the heavy duty power cord they used compared to the cheap electric starters. I beleave the going price of aproximatelly $80 for them is totally worth every penny. If you count the price of your lighting stick/cube, propane, fluid use per year its actually a lot more then this unit would cost you. I love the fact that this unit is pretty enviromentally friendly and takes less then a minute to get a flame going and that I don't have to wait over 10 minutes to start cooking. I definatelly without a doubt rate the Looftlighter a 5 Star out of 5 Star. This one is definatelly a must have and I recommend it to all BBQ owner and fireplace owners.
Here's where you can buy a Looftlighter: Retailers
Contact info:
LOOFT INDUSTRIES AB
Dalènum 7 181 70
Lidingö Sweden
tel +46 (0)8 20 00 95
fax +46 (0)8 20 00 96
Website: looftindustries
Email: info looftindustries 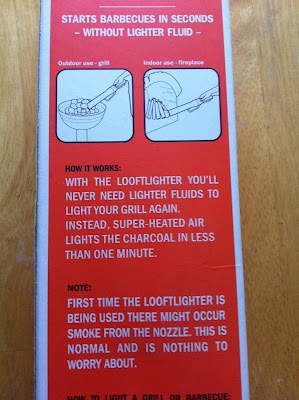 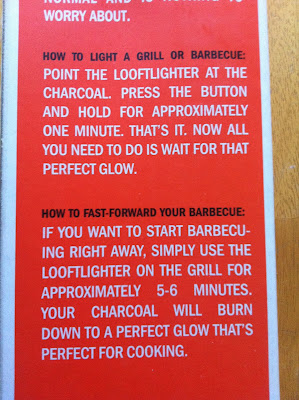 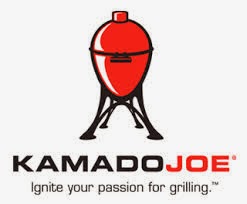 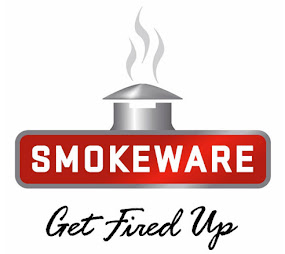